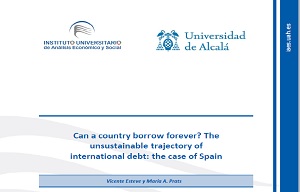 Can a country borrow forever? The unsustainable trajectory of international debt: the case of Spain

We address the issue of the sustainability Spain´s external debt, using data for the period 1970-2020. To detect episodes of potentially explosive behavior of the Spanish net foreign assets over GDP ratio and the current account balance over GDP ratio, as well as episodes of external adjustments over this long period, we employ a recursive unit root test approach. Our empirical analysis leads us to conclude that there is some evidence of bubbles in the ratio between Spanish net foreign assets and the GDP. In contrast, the evidence that the ratio between the Spanish current account balance and the GDP had explosive subperiods is very weak.The episode of explosive behavior identified in the position of net foreign assets during the period 2002-2015 was the result of the country´s economic expansion 1995-2007.

The results also show an external adjustment during the period 2008-2019 after the start of a cyclical economic recession.